Surfer knocked out by whale at Bondi Beach

A surfer has been knocked unconscious by a 15-m humpback whale that flicked him off his board at Sydney's Bondi Beach. The whale was frolicking in the water among surfers about 70m offshore on Sunday morning when it got too close to Bishan Rajapakse, a 38-year-old doctor from Bondi, and knocked him off his board. 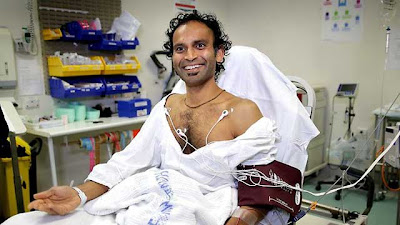 Dr Rajapakse lost consciousness for about 10 seconds and other surfers managed to help him back to the beach. He was treated by paramedics and lifeguards before being taken to St Vincent's Hospital in a stable condition. Despite his injuries, Dr Rajapakse said his encounter with the whale was a “very beautiful experience”. “I’ve seen a few whales in Bondi before, just walking, but this was the biggest I’ve seen and we were so close to it.” 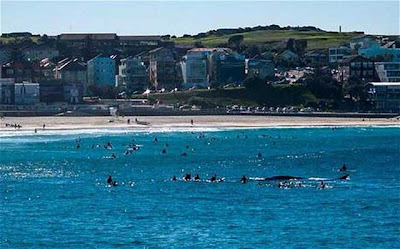 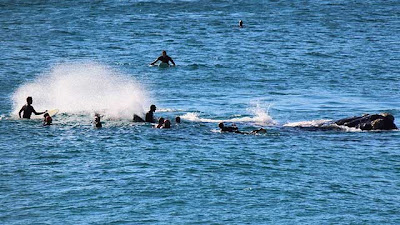 Dr Rajapakse said the whale seemed to be curious about him and a number of other surfers who paddled closer to the giant creature to get a closer look. “You felt like you were in the whale’s turf. He or she was not afraid at all,” Dr Rajapakse said. Bondi lifeguard Adrian Kovacic says lifesavers had spotted the whale in the water and had been aware of the potential for injury. "The whale came heaps close to shore and then the surfers were heaps close to it," Mr Kovacic said.

"We sent our lifeguard to make a big radius around the whale to get everyone away, and while he was doing that one guy got too close and got hit by the tail. We treated it as a spinal, and then he went to hospital." One witness said the whale was "the size of a bus". "I mean, it was 40 feet long - it was huge," Lachlan Harris said. "They were playing and the whale was frolicking with them and having a lot of fun and sort of popping its head out. It just flicked its tail and some surfers were in the wrong (place) and the next thing, you know, a surfboard is flying in the air...  It was unbelievable."
Posted by arbroath at 6:02 am
Email ThisBlogThis!Share to TwitterShare to Facebook