A gang of angry drunken elk barred a man from entering his home in suburban Stockholm on Tuesday, leaving the frightened homeowner no choice but to call police for help. "Five drunken elk were threatening a resident who was barred from entering his own home," says an incident report on the website of the Stockholm police department.

The author of the report confirmed that the homeowner, who lives on the island of Ingarö in Stockholm's eastern suburbs, was justified in calling the police for help. "I'm not surprised that he called the police when he was faced with a gang of five drunken elk," police spokesman Albin Näverberg said. 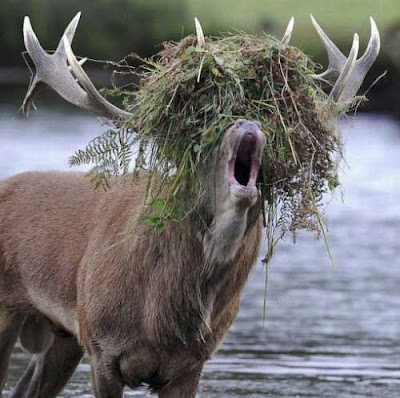 "They can be really dangerous. They become fearless. Instead of backing away when a person approaches, they move toward you. They may even take a run at you." The incident involved four adult elk and one calf, Näverberg explained, all of whom were intoxicated after having eaten fermented apples that had fallen from the homeowner's apple tree.

"Police who arrived on the scene reported that the animals had been warned that the police were on their way and wisely decided to leave the address," the report read. "The elk will have to find somewhere else to get intoxicated." The homeowner was instructed by officers to clear his yard of fermented apples in order to avoid any future incidents with drunken elk gangs.
Posted by arbroath at 6:02 am
Email ThisBlogThis!Share to TwitterShare to Facebook

That picture is priceless. I wasn't with the news clip so I assume you found it somewhere? Great shot!

I found it at Google images, Fred.

Gee, if you know that elks get drunk on fermented apples, and are then dangerous, why wait for the police to tell you to clean up the apples?

And yet again, amazing picture!

I used to have a husband who looked very similar to this after drinking.

All these drunken elk incidents really crack me up!