Police blocked a road and cornered a lemur in a front garden after it escaped from Colchester Zoo. Officers were called to Stanway, close to the zoo’s entrance, on Sunday evening after receiving calls from members of the public. 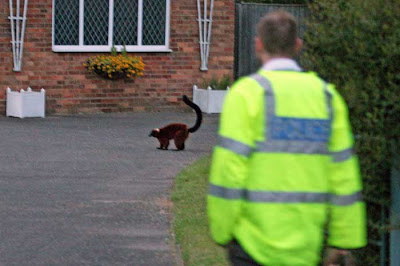 The Madagascan red lemur had been seen darting in and out of traffic, but police cornered the animal and threw it bananas in an attempt to contain it. The drama began when motorists saw the lemur walking along the pavement next to a busy road. They called police, who closed the road for 20 minutes until it was caught.

The lemur, unfazed by the hullabaloo, scampered to a house half-a-mile from the zoo. An onlooker said: “He looked like he was going to catch a bus into town and go off for a big adventure. The keeper was delighted when she had him safely in her arms – I think the banana must have done the trick.” 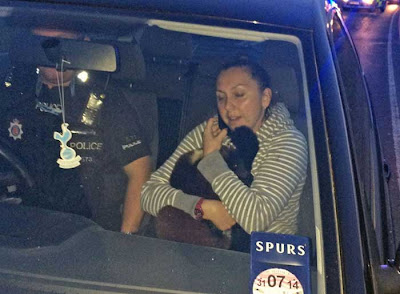 An Essex Police spokesman said: “We were contacted by a motorist shortly before 8.30pm, who was reporting a monkey was on the road outside Colchester Zoo. Officers attended the scene and contained the lemur before zoo staff arrived and collected the animal 15 minutes later. There was no further police action."
Posted by arbroath at 6:00 am
Email ThisBlogThis!Share to TwitterShare to Facebook