A seagull left a young girl covered in blood after snatching a sausage from her mouth. Five-year-old Burgh Kemp was sitting on the the beach at Woolacombe, north Devon, when the bird swooped out of the sky, took off with half of her sausage in its beak, and left her face covered in blood. Burgh is now terrified to return to her former favourite spot in case she's attacked again. 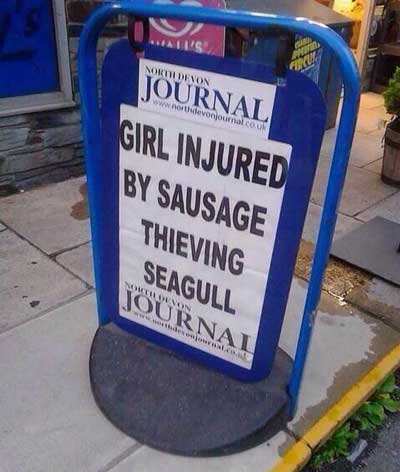 Burgh’s mother, Louise Kemp, from Barnstaple, said the family were enjoying a picnic on the beach on Friday evening. She said: “Seagulls are always hanging around trying to get at people’s food but I’ve never seen anything this vicious. We saw it standing on the beach and thought it was doing that usual seagull thing of standing around, hoping we’d throw it a few bits.

“We thought it would go away when it realised it wasn’t going to get anything.” But far from leaving the family in peace, the gull took to the sky and flew at the head of the unsuspecting child. “She let out an almighty scream,” said Louise. “There was blood everywhere, on my jeans and shirt, which traumatised Burgh even more. The seagull stood around as if it was mocking us, hoping to get the rest of the sausage.“ 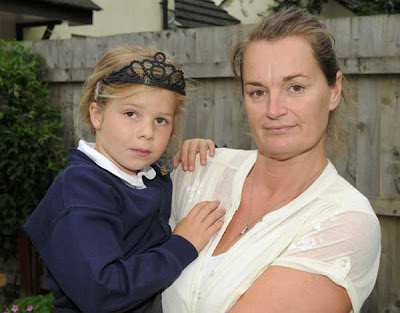 “There was a lot of blood on Burgh’s bottom lip, even though it wasn’t a deep cut.” Louise packed up the picnic and took Burgh to hospital, where her injury was found not to be serious. “Luckily that area heals quickly but it could have been much worse,” said Louise. “What if it had been her eye? “She said she didn’t want to go back to Woolacombe but we’ll get over it and try to avoid turning it into a major issue.”
Posted by arbroath at 6:01 am
Email ThisBlogThis!Share to TwitterShare to Facebook

Is it complicated in your life? I have encountered a dilemma of this nature if in a tough time there is no decent one to help you. It's difficult if I don't have someone else to share my impressions, so it's cool that it has such a great Contesting Program. All my problems have vanished thanks to single ukrainian ladies. I met my first beautiful wife here already, and we dated for 2 months. I would recommend it to a lot of people who want to find their passion.

Hello. I wanted to clean up, because my appearance did not suit me. I needed a good beauty salon, but I could not find one that suited me. On the advice of my good friend, I read the article about giving hands. It was extremely helpful to me. It covers the most basic points about most salons. Moreover, objectively considered their pros and cons. This article really helped me with my choice. So, I can recommend this great article to anyone who is facing the same problem as me!