Crocheted blanket saved after removal of wasps' nest from bed

A giant wasps' nest took over the bed of a spare bedroom at a house in Winchester, Hampshire. Mr Birkett, of Owslebury-based Longwood Services, who was called to deal with it said: “In 45 years I have never seen anything like it. There must have been 5,000 wasps.”

The client lives alone in the five-bedroom house in St Cross and had not been in the spare room for several months before her son opened the door and saw the huge nest. The window had been left open. The wasps were enlarging their home by chewing through the pillows and into the mattress. 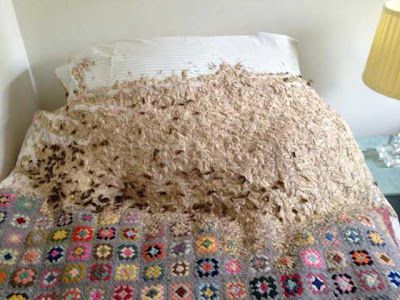 The nest measured about three feet wide by a foot and a half deep. Mr Birkett said: “It was a job to deal with it. I had protective gear on. At one stage there must have been 2,000 wasps buzzing around me. If someone had gone in to the room and not known what it was it would have been pretty serious.”

Mr Birkett used a spray to kill the insects on Sunday. It gives him mixed feelings. “It is amazing how they build it, by chewing the wood off gates and things. Although they are a pest in homes they are a friend of the gardener by killing aphids. I thought 'what a shame', but I had a job to do and the client was terrified.” Mr Birkett was able to save the crocheted blanket under the nest.
Posted by arbroath at 6:00 am
Email ThisBlogThis!Share to TwitterShare to Facebook