St Stephen's Church in Stockbridge has been chiming every hour for almost 190 years but it is thought the bell may have become louder over time. 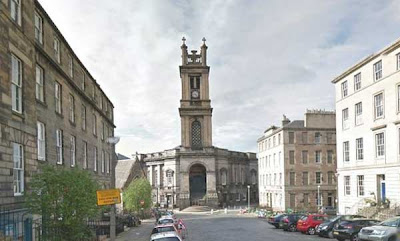 Now the 186-year-old bell has been temporarily stopped from ringing until a solution can be found. It follows four complaints from residents in the area. The church was designed by "Athens of the North" architect William Henry Playfair.

The church has a 160ft tower and the longest clock pendulum in Europe. An Edinburgh City Council spokeswoman said: "The bell has been temporarily silenced so that we can investigate concerns about noise."
Posted by arbroath at 6:00 am
Email ThisBlogThis!Share to TwitterShare to Facebook

Sounds like another "I bought a house by the airport and now the planes are too loud" scenario.

Why don't the complaining residents simply move? I'm quite sure the bell has been there longer than they have.

In some towns the simply have the clock set so it only chimes during the day. Probably easier than reducing the volume.