Dutch artist Florentijin Hofman has installed a 25-metre (82-feet) white rabbit, leaning up against an old aircraft hangar at the Taoyuan Naval Aviation Base in Taiwan. 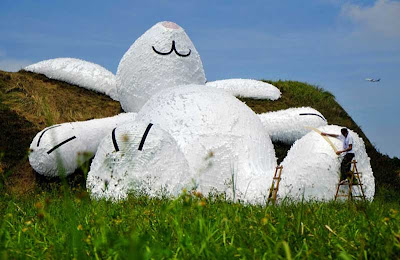 Hofman's creation, called the Moon Rabbit, is made from weatherproof paper and celebrates the Chinese folklore story of a rabbit on the moon, as the Chinese Moon Festival approaches. 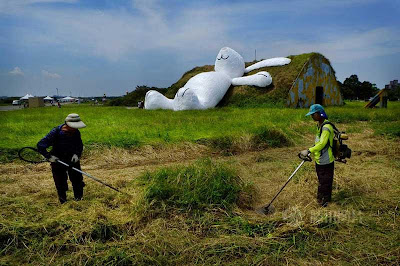 According to Chinese folklore, a rabbit is sent to live on the moon as a reward after he has proved his selflessness to the gods.

The Moon Rabbit is being displayed as part of an art installation festival held by Taiwan's Taoyuan County.
Posted by arbroath at 6:01 am
Email ThisBlogThis!Share to TwitterShare to Facebook