The parliamentary authorities have defended their decision to ask a gardener to remove each leaf manually from trees outside the House of Commons in Westminster to save time spent raking them up. 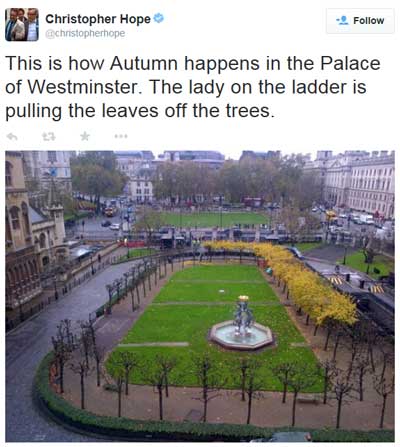 Although typical winter temperatures have not yet arrived in London, a female worker on a step ladder has been spotted taking down yellow leaves, one by one, from a circle of lime trees. 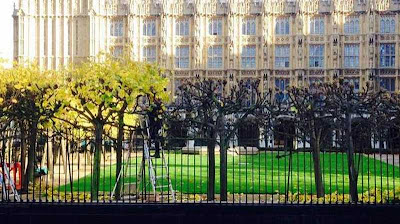 The gardener stripped bare the trees that border the square below Big Ben, instead of allowing them to fall naturally. Asked about the decision, a Commons spokesman said: “If we waited for the leaves to fall off it would waste a lot of time raking them up. It is more time efficient.” 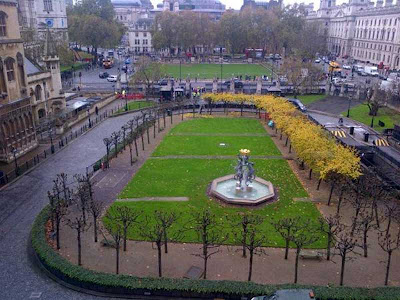 In a further comment, he added: “The House of Commons employs a gardening service which covers maintenance of more than 145 trees on the parliamentary estate as well as all grassed areas, planted areas, indoor plants, containers and window boxes. It is not possible to separate the cost of removing leaves from the trees in New Palace Yard from the wider cost of the gardening contract. The leaves are removed each winter as a more time-efficient alternative to raking fallen leaves.”
Posted by arbroath at 6:00 am
Email ThisBlogThis!Share to TwitterShare to Facebook

Now that's proactive motivational poster if ever there was one.

I'm not an arborist, but wouldn't ripping the leaves off a tree open it up to infection more than letting the leaves drop off naturally?

I can kind of see the (warped) logic in getting it all over and done with in one go, but I like trees and having politicians to commit seppuku would give more satisfaction and save more money.

I'd love to see the actual study showing it was more efficient. Or, not. Which seems more likely.

Pulling each individual leaf off a tree seems much more labor intensive than raking up a pile of leaves!

Look up pollardind and preaching. She isn't removing the previous years growth to maintain their shape