A 12-year-old boy who went missing after being told off by his mother last Monday was found by police on Sunday afternoon in an IKEA store in Shanghai. Peng Yijian, who is said to have survived on supermarket free samples while missing, is now being treated in hospital.

Because Yijian’s very weak with hunger, he’s receiving an intravenous drip in hospital, his mother, surnamed Liu, said. His father, surnamed Peng, said his son has hung about in the city during the six-day period he was missing. When he felt hungry, he went to supermarkets and took some free food samples they offer, said Peng. The couple said they appreciated the help of local police, local media and kind-hearted residents in finding their son. 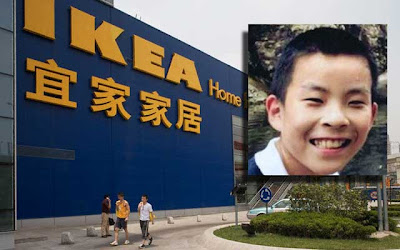 And they promised to ensure that they have better communications with Yijian in the future. After he was reported missing last Tuesday, police checked surveillance camera footage around his home from the previous day, said Sun Miao, a police officer in Xuhui District. In the footage, officers spotted him wandering around Shanghai South Railway Station. Then when they checked Tuesday’s video footage, police saw the boy at a nearby Carrefour outlet.

“We thought there might be other places he likes to visit, so we asked his mother. She gave us eight or nine names, including Caoxi Park, Nanfang Shopping Mall, In Center and IKEA,” Sun said. Officers were dispatched and the boy was spotted by a surveillance camera at the IKEA outlet on Caoxi Road - 3 kilometres from the Carrefour sighting. After a 40-minute hunt, during which exits were blocked, police found Yijian near an escalator on the ground floor. Liu said her son had run away before, but never for so long.
Posted by arbroath at 6:04 am
Email ThisBlogThis!Share to TwitterShare to Facebook

Mom, you have a problem. Your problem.