At least three middle school children in Clovis, New Mexico, are accused of snorting Smarties on campus. The Clovis Municipal School District suspended the boys for 10 days. In a letter the district classifies Smarties as drugs and explains students can be suspended or even expelled by possessing them. 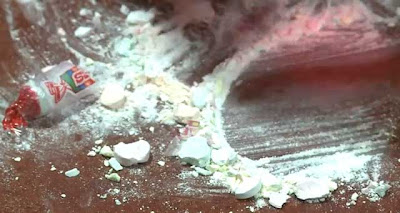 “I was in shock. I couldn’t believe what I was hearing and I didn’t know anyone could do anything like that with a Smartie,” said Kelly Cook. Kelly Cook is Andrew Stonelake’s mother. Stonelake, 13, is a 7th grader at Marshall Middle School in Clovis. He’s one of the boy’s being punished for inhaling the candy, but Cook says her son’s side of the story is very different. 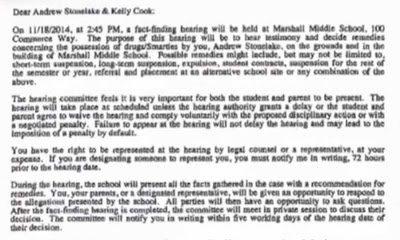 “He explained there was no inhaling or snorting of any kind. That they were crushing it up and blowing smoke out at each other. That they were horse playing,” said Cook. School officials have ordered the family to attend a fact-finding hearing next week. They even advised them they have the right to legal counsel. “I have no words to say about that,” said Cook.

“I am in so much shock that they would go to this extreme.” Cook says Andrew’s punishment is ridiculous. “There was no warning of any kind stating that they weren’t allowed to have these things,” said Cook. Andrew’s hearing is scheduled for November 19. At that time, the district will listen to Andrew’s side of the story then decide if he should be punished any further. The district says after the hearing it’ll take them five days to make a decision.
Posted by arbroath at 6:05 am
Email ThisBlogThis!Share to TwitterShare to Facebook

Someone needs to give the school officials a book:

Sheesh. Kafka had nothing on these guys.

Oh wow, kids are still doing that? My friends and I "may or may not" have done that in school 20 years ago!
Smash up a roll of Smarties and snort it & it looks like you're doing a line of coke in the classroom. It's hilarious if you're 14, then you get caught and suspended from school (or 2 weeks' detention in my case) for imitating illegal drug use.
My high school had to ban Smarties candy as well.

This kid is blowing smoke alright.

Smarties are what you're left with after you've eaten all your other Halloween candy. And people give out a ton of drugs/Smarties on Halloween. Kids only do the drugs/Smarties last out of boredom and desperation for the remembered highs of the Snickers bar.

My first thought on seeing the headline is of the candy coated chocolate Smarties. Melts in your nose, not in your hand.

I feel like that would cause a serious sinus infection.

Schoolchildren should not use drugs. Schoolchildren should only learn. If a student does not cope with studying at an educational institution, then the student can turn to a service that helps with homework and which is advertised in the article https://underconstructionpage.com/new-generation-products-marketing-creation-2021/.

Students must lead a healthy lifestyle at least on campus / university grounds. As for me, the students should only study at the university. If there are problems with this, then students can buy papers from the service that is advertised in the article https://wpnewsify.com/blog/it-startup-funding-stages/.

It is difficult to graduate from the university. Many students have difficulty studying at the university. As for me, students should buy homework from the service that is advertised in the article https://www.dailygame.net/blog/can-you-go-against-public-opinion-or-authors-opinion-when-you-write-essay if they cannot cope with the study on their own.

Orchard Packaging is a US-based manufacturing company. We are providing all kinds of Custom Printed Boxes at wholesale rates with fast and free shipping. We can design custom subscription boxes in all dimensions and styles according to customers' demands and product specifications.
Visit our site: Orchard Packaging

Hey, your blog post is too informative. Keep sharing that information. On the other side, you can read and buy the product at a cheap rate Lip Gloss Box wholesale.