Police officers say a California man's attempt at freedom left him with two self-inflicted black eyes and a pair of convictions. Aleksander R. Tomaszewski, complained he was beaten by detectives in Oregon when he was in custody and insisted on pressing charges against them, said Sgt. Carrie Carver, a Lane County Sheriff's Office spokeswoman. 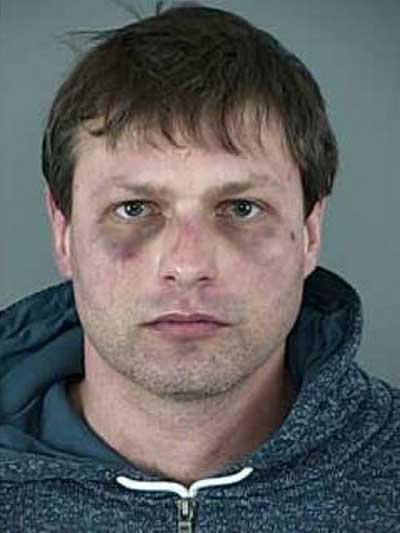 But a video camera didn't capture the alleged assault. Instead, it recorded Tomaszewski punching himself in the face multiple times. "When he learned that the incident was caught on camera, he admitted that he thought making the claim would get him released," Carver said. The incident unfolded on January 9, when Tomaszewski was being interviewed on suspicion of sexual abuse.

Carver said video cameras were rolling in the interview room and in a holding cell where Tomaszewski was later moved. The second camera recorded him assaulting himself. But she said when deputies asked about his injuries, Tomaszewski blamed the detectives who had interviewed him earlier. He repeatedly said he wanted to press charges and signed a statement spelling out the police brutality he claimed happened, according to Carver. Video footage disproved his story.

The four-minute video shows Tomaszewski pacing as he punched both eyes. He then sat down and resumed pounding his face. Tomaszewski pleaded guilty to attempted coercion and filing a false report and was on convicted February 10. Both charges carried a 20-day prison sentence, but he was given credit for time served and released from jail the same day. He also must pay $600 in fines and serve three years' probation. Sheriff's office records show the sex-abuse charge that initially brought about his arrest was dismissed.
Posted by arbroath at 6:05 am
Email ThisBlogThis!Share to TwitterShare to Facebook