A police dog who sniffed out firearms, cash and drugs worth some £5m has been given a posthumous award. Springer Spaniel Jake died aged 13, just weeks before picking up the PDSA Order of Merit, sometimes referred to as the animal equivalent of the OBE. The Order of Merit was collected by Jake's "girlfriend", a police dog called Gwen, at a ceremony in London on Wednesday. Jake was Warwickshire Police's longest serving dog when he retired in August. Handler PC Andy Crouch said the whole family had been "devastated" by Jake's sudden death in March and the award would "take pride of place". Jake was teamed up with PC Crouch soon after the dog joined the Warwickshire force aged 18 months. 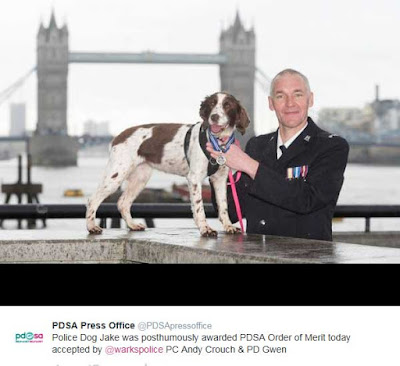 "Even after his retirement, he loved playing and we would often set up finds for him to seek out, to keep him stimulated," PC Crouch said. "Jake would have carried on working, given half the chance, but it was important for him to take some time out. He was a joy to work with and I doubt that many handlers will find a dog so willing to work and to please."

During a 10-year career, he made more than 500 finds, including assault rifles, hand guns and ammunition, as well as drugs with an estimated street value of £4.5m. The PDSA said at one music festival Jake found cannabis worth more than £2,000 concealed on a tour bus, resulting in the delay of a major act. The Order of Merit is awarded to any animal which "merited recognition for exceptional acts of devotion and represents outstanding examples of the special relationship that exists between animals and humans".
Posted by arbroath at 6:00 am
Email ThisBlogThis!Share to TwitterShare to Facebook