Goat not ghost responsible for turning lights on at college

A goat fooled staff at a college in Wales into thinking they were being haunted by ghosts. Turning off lights to save energy is common practice at Coleg Cambria’s Northop campus yet caretakers kept reporting lights were regularly being left on in the rare breeds centre’s goat barn.

But staff were adamant they are turning them off and a baffled animal centre manager Wendy Gacem began to suspect a ghost or intruders were to blame. This week the truth was revealed after Jake the Bagot Billy Goat was caught red-handed flicking the switch. Staff were working in the barn when the lights came on and turned around to see Jake had climbed on his hayrack and pushed the switch with his horns. 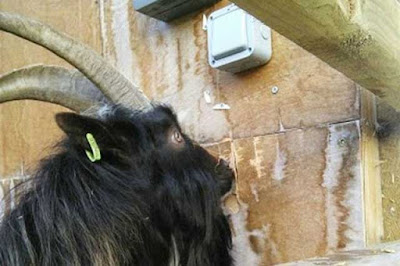 Wendy said: “It is a relief that we do not have intruders or a ghost, and animal care staff are relieved that they are no longer being grilled about leaving lights on. Jake has been a cheeky character since he arrived and will often jump on to a wheelbarrow to be pushed around.” Wendy says rare breed Jake has been forgiven for his cheeky antics after becoming a proud father to twin girls last week.

A college spokesman added: “Coleg Cambria takes its responsibilities seriously by encouraging staff to reduce energy consumption. This has been recognised across the UK through the Carbon Trust and Green Dragon sustainability awards. The college is proud to be breeding this very rare goat which are classed as endangered on The Rare Breed Survival Trust Watchlist.”
Posted by arbroath at 6:03 am
Email ThisBlogThis!Share to TwitterShare to Facebook