A state trooper has been reprimanded, and will be required to undergo counselling, after posing for a photo with Snoop Dogg at the South by Southwest festival in Austin, because the rapper has several convictions for drug possession.

Billy Spears was working security at the event in March when Snoop Dogg asked to take a picture with him. The artist posted the image to Instagram with the comment, “Me n my deputy dogg”. 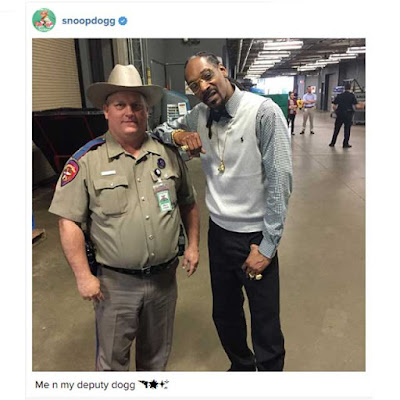 Department of Public Safety and Transportation officials saw the posting and cited Spears for deficiencies that require counselling by a supervisor. Spears’s attorney says his client didn’t know about the rapper’s criminal record.

Spears cannot appeal the citation because it isn’t a formal disciplinary action. A department spokesman said the agency did not discuss or release specifics of personnel issues unless they result in disciplinary action.
Posted by arbroath at 6:06 am
Email ThisBlogThis!Share to TwitterShare to Facebook

This is so stupid. I'll tell you what isn't, though. I worked at a county jail and we had a serial killer in there trying to appeal his death sentence. These stupid ass cops actually asked him for his autograph. Btw, he lost the appeal and was electrocuted in the mid 90s.

"Required to undergo counselling." Wow, this little story really made me laugh.