A bus company came under fire for promoting a new route with posters on the back of its vehicles showing an apparently topless woman holding a sign saying “ride me all day for £3”. The adverts, by Cardiff-based New Adventure Travel, prompted outrage in the city. 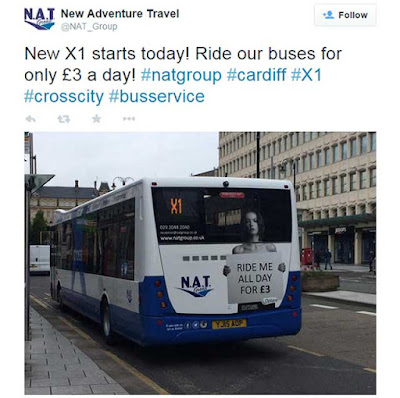 The company, which runs services in Cardiff and elsewhere in Wales, including school buses, was promoting the launch of a fleet of new buses for a cross-city service in Cardiff. At 11.30am on Monday, just a few hours after the campaign first appeared, the company said the adverts would be withdrawn. 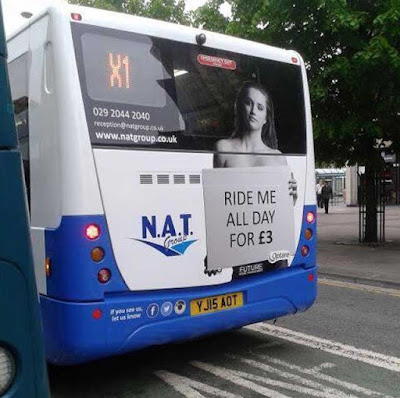 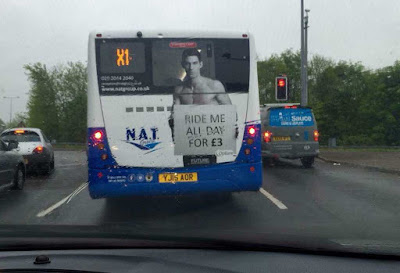 While the posters feature both female and male models, the female versions came in for particular criticism. The company was apologetic. “Firstly we have stated that our objectives have been to make catching the bus attractive to the younger generation. We therefore developed an internal advertising campaign featuring males and females to hold boards to promote the cost of our daily tickets. 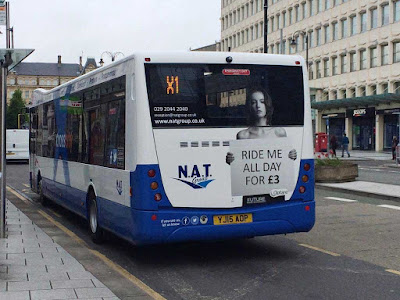 “The slogan of ‘ride me all day for £3’ whilst being a little tongue in cheek was in no way intended to cause offence to either men or women and, if the advert has done so then we apologise unreservedly. There has certainly been no intention to objectify either men or women. Given the volume of negativity received we have decided to remove the pictures from the back of the buses within the next 24 hours.”
Posted by arbroath at 6:00 am
Email ThisBlogThis!Share to TwitterShare to Facebook

If they've got both men and women, it's a bit crude but I'd hardly say worth spending money to take down. If people are that sensitive the bus company could just say "When it's run its course we'll take it down and not replace it, sorry."

Aww, someone got their feelings hurt by a sexually suggestive advertisement. Some people are just precious.