Man traumatised after part of nipple bitten off by zebra

A man in Muskogee, Oklahoma, is recovering after being bitten by a zebra. Leonard Overcash was working in a yard next to the animal's field when the animal attacked him.

“He was just staring, you know just looking, and he just put his head over the fence and bit me,” said Overcash. “I was traumatised,” he added. He said it bit off a piece of his right nipple. Overcash had to have seven stitches. 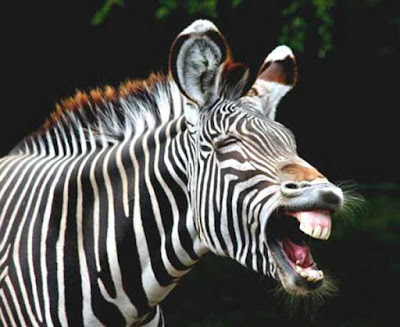 The owner of the animal said she has had the zebra for 10 years, since it was a baby. People in the neighbourhood said they’ve never had any issues with the zebra. The animal has been locked in a stable since the incident, but now the city of Muskogee is making the owner get rid of it.

City officials said exotic animals are not allowed within Muskogee city limits and that it has been that way for years. The owner said she was unaware of the law and was told she did not need a permit before she got the pet zebra. She has agreed to pay for all of Overcash’s medical bills and has 30 days to find a new home for the zebra. Overcash said he’s doing much better and he’s back at work. “It hurt. It was very severe. It was very traumatising,” he said.
Posted by arbroath at 6:05 am
Email ThisBlogThis!Share to TwitterShare to Facebook

And I'll bet his surgeon wrote in his log that evening, "Heard hoofbeats. Found zebra."

That's a medical joke for those in the know.