Turners Hill, in the Mid Sussex District of West Sussex, may be stuck with permanently wonky railings after the parish council was told they are "not bent enough" to fix and doing so would be a health and safety risk. Turners Hill Parish Council applied to West Sussex County Council (WSCC) to fix a row of railings on East Street, which have been askew since a vehicle drove into them some time ago. 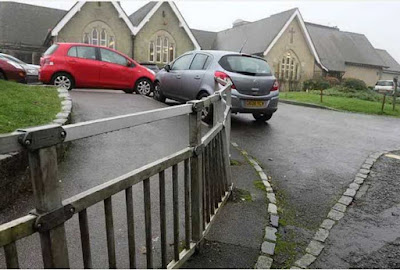 But at a meeting of the parish council on November 3, it emerged that the county council declined to address the problem due to health and safety concerns and a lack of money. The parish council was told that trying to straighten the railings would make them loose in the ground, causing a safety hazard, and that they can't be removed because there isn't enough money to replace them. Graham Pearce, vice-chairman for the parish council, said: "They said it's bent, but not bent enough for them to come and fix it.

"We're trying to make the village nice and tidy but unfortunately we can't do anything about this because the railings belong to the highways [department at West Sussex] and it's their decision to fix it or not. It's all down to cost savings. If they can get away with leaving it, they will." Phil Shoubridge, owner of The Crown pub, which is just opposite the damaged railings, said that he isn't surprised at WSCC's response. He said: "It doesn't surprise me that the county council won't be fixing it. It's another example of modern bureaucracy at work.

"They take enough money from me for council tax yet they can't fix the railings." Thelma Mason, chairman of the parish council, explained the reasons given by the county council for not fixing the railing. She said: "If you tried to straighten it, it would pull up the tarmac. At the moment it's not a safety hazard. Visually, it's not great, but we're not treating it as a priority. We're more interested in getting funding to replace the village signpost on the green, which looks an absolute state." A spokesman for West Sussex County Council said: "The railings are safe. Funding has to be prioritised for highways repairs that need to be made."
Posted by arbroath at 6:00 am
Email ThisBlogThis!Share to TwitterShare to Facebook

Simple solution: sneak out at night with a tow rope and bend them a whole lot more.