A dog left a trail of destruction after jumping behind the wheel of his owner's truck.

The golden Labrador retriever appeared to drive the truck across a road in Minnesota on Friday afternoon. The human driver had left the unoccupied vehicle running in a nearby car park. 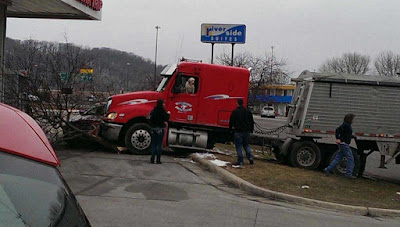 Mankato police say the lorry ploughed through the car park, across the street and over a kerb after it was apparently knocked into gear. It reportedly hit a tree and then crashed into a parked car.

Customers at a Kwik Trip petrol station watched in alarm as the truck drove towards them only to stop before more chaos could be unleashed. A passer-by discovered the dog sitting in the driver's seat when he jumped into the truck to stop it.
Posted by arbroath at 6:06 am
Email ThisBlogThis!Share to TwitterShare to Facebook

Pro Tip, if you open the door to someone else's truck and see a dog, close that sumbitch quick. They tend to be possessive, protective, and aggressive, when dad's not around.