An orangutan famous for puffing on cigarettes gave birth this week at an Indonesian zoo in a rare event giving a boon to the critically endangered species. Tori, 15, gave birth on Wednesday in the central Javanese city of Solo, Taru Jurug Zoo director Lilik Kristanto said. "The delivery took place naturally without human intervention," he said. 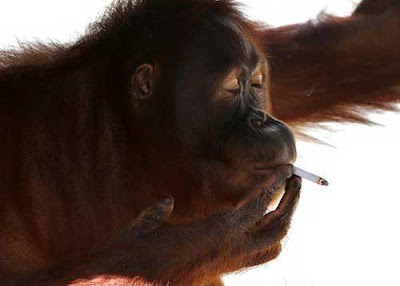 Visitors had for 10 years tossed cigarettes to the famous smoking orangutan, who was moved in July to a 200-metre island at the zoo to force her to quit cold turkey. Kristanto said Tori gave birth on the island, where she is being kept with her mate and baby.

"We're very happy. The baby is healthy and Tori is a good mother," he said, adding that the orangutan smoked through most of her pregnancy. Tori mated with a 20-year-old orangutan in November 2011 and the birth is the first at the zoo since Tori was born. 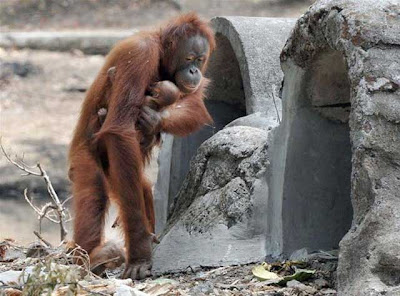 "Orangutans are critically endangered, so this is good news for conservation. We have another young orangutan pair here, so I hope there will be more orangutan babies here in the future," he said. Experts believe that between 50,000 and 60,000 of the two orangutan species are left in the wild, 80 percent of them in Indonesia and the rest in Malaysia. Orangutans are faced with extinction from poaching and the rapid destruction of their forest habitat, driven largely by palm oil and paper plantations.
Posted by arbroath at 6:03 am
Email ThisBlogThis!Share to TwitterShare to Facebook