Wildlife officials and brewery workers have rescued a large mule deer which became stranded on an icy lake. The animal lost traction after it found itself in the middle of the of the lake near Golden, Colorado. 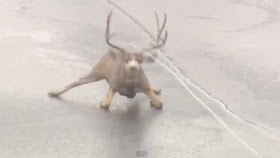 Rescue crews were unable to get a boat out to the deer, so they tried simply to shoo it off the ice. But that didn't work, because the animal wasn't able to get any traction.

Finally, certified ice rescuer, Todd Taylor, was able to lasso the deer and pull it in. "That animal can go on an live out the rest of its life…absolutely, absolutely, it's a good day," said Taylor

The deer did still have the rope tangled in its antlers when it left the icy lake. But wildlife officials say the deer will shed those antlers as part of the natural growth process and in the process get rid of the rope.