Man ordered to remove zombie statue from his yard

A man from south Nashville, Tennessee, says that his homeowners association is ordering him to remove a statue of a zombie from his front yard. Jim Grinstead has lived in his home near Percy Priest Lake for nearly 10 years and says the zombie he and his wife call “Clawed” has been in his yard for five of those years. 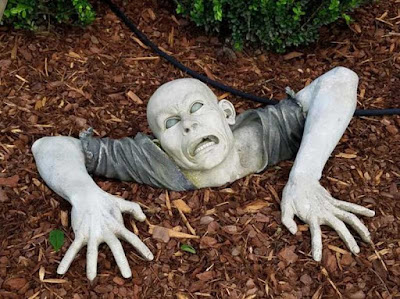 He was surprised when he recently received a letter from the homeowners association ordering him to get rid of the statue. The first sentence of the letter says: “During a recent inspection of the community on April 19, 2016, it was noted that there is a zombie in your yard that needs to be removed.” Grinstead says his family has a specific sense of humour that makes Clawed a perfect fit for their home. "I don't own guns, but I have a zombie, so it's my personal choice of defence system." Grinstead joked. The letter caught Grinstead off-guard because no neighbours had ever complained about Clawed, and Grinstead believes this is a homeowners association going overboard.

"I don't have the freedom to pick what I want in my yard because somebody wants to read the rules so strictly that it can't allow for individuality? That's a shame." Grinstead said. As of Tuesday afternoon, Clawed remained in the front yard, but Grinstead knows he'll have to claw his way somewhere else. "To know that he's gonna have to go is like losing a family member, you know? It's disturbing." Grinstead said, adding that he had decided to move Clawed by the end of the week to avoid retribution from the homeowners association.
Posted by arbroath at 6:04 am
Email ThisBlogThis!Share to TwitterShare to Facebook

This is America, you all have guns, rise up against the homeowners association, what fucking right do they have to stop you being you, you are not raping people, killing them, you are not wearing white pointy headed sheets.
If you don't have a gun, pitchforks and torches will do, get rid of them people.

Never, ever buy a house in an HOA neighborhood. They exist to keep the homes bland, white-bread, and identical in the name of "property values." You may as well just rent an apartment in a big complex.

They do have their purpose: keeping bland people who care about property values away from the rest of us.

HOAs are the bane of America---I worked for a cable company--and they had to get special white cables to install in the area because they didn't allow the black cables in the area. (I'm sure that is a metaphor for something else about HOAs)