A British satirist has translated 15 of Shakespeare's classic plays into chav speak.

The Danish prince, who is re-named 'Amlet, asks: "To be or not to be, innit?", while Romeo pines for his "fit bitch Jools". 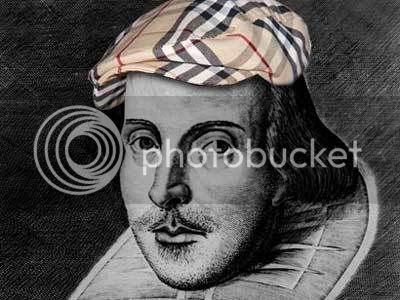 Mr Baum's other titles include Macbeff, Much Ado About Sod All, De 'Appy Bitches of Windsor, De Taming of de Bitch, Two Geezas Of Verona and All's Sweet That Ends Sweet, Innit.

Mr Baum, 48, says his versions of the Bard's classics, while abridged, remain true to the originals, retaining "the important sexist, duplicitous, cross-dressing and violent moments that made William Shakespeare well wicked."

If the Bard was living today, Mr Baum writes on his website, he would "still be writing in the Globe turf, getting loads of respect from the Stratford-upon-Avon massive and producing works of pure genius."
Posted by arbroath at 9:53 am
Email ThisBlogThis!Share to TwitterShare to Facebook