Now, a 'bum bra' for your sagging buttocks

A leading US psychologist has patented a bra for the bum, which according to her, restores pertness to sagging buttocks.

Creator Karin Hart claims that the garment, featuring straps worn around the waist and under the buttocks, instantly shapes and adds tone to the rear.

Hart said that she came up with the buttock-clenching idea after realising that her own bottom wasn't as pert as it used to be. 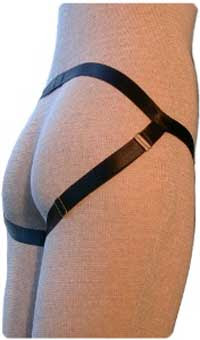 "The Biniki buttocks support idea came to me at a moment of personal need. One look in the mirror after some rapid weight loss showed me the unhappy truth, my bottom was sagging."

Dr Hart started developing designs for a wearable item that would do the same job as a surgical bottom lift.

She patented her invention and now sells what she has dubbed the "butt bra" through her US-based company for about 15 pounds.

Photo from here.
Posted by arbroath at 9:50 am
Email ThisBlogThis!Share to TwitterShare to Facebook