Brits fail to cash in on free £5 notes

The full extent of Britain’s financial inertia was laid bare yesterday when passers-by in London and Manchester were offered a free £5 note, no strings attached. Just 28 people took free fivers in two busy crowded streets. And further research shows that half of all Brits claim they would also turn down free cash.

Representatives from price comparison website, www.moneysupermarket.com wandered the streets yesterday morning wearing sandwich boards offering a free £5 note to anyone who asked. Despite encountering over 1800 people, only 28 passers by bothered to take advantage of the offer.

Even when those few plucky souls claimed their free booty it didn’t spark a stampede. The exercise was designed to illustrate that, credit crunch or no credit crunch, Brits are unwilling to take even the simplest steps to improve their financial situation. 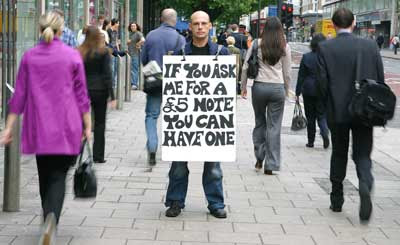 The experiment also found a stark difference in the attitudes of men and women. On the streets of London and Manchester, all but 7 of the people who claimed the free cash were men and the research backed this up further. In a poll of 2000 people almost two thirds of women (64 per cent) said they would not claim the free fiver, compared to 41 per cent of money-shy men.

Additionally, the experiment found that Londoners were more reserved than their Manchester counterparts. Whilst just 1.2 per cent of people took advantage of the offer in London, this figure increased to 3.1 per cent on the streets of Manchester.

Just over one in ten people said they would feel too embarrassed and three per cent of people said that £5 wasn’t worth the effort.
Posted by arbroath at 9:21 am
Email ThisBlogThis!Share to TwitterShare to Facebook