Philadelphia is rolling out a program to try to get motorists to slow down.

The city is putting out high-tech plastic devices that create a 3-D image that looks like a bump in the road. Chief traffic engineer Charles Denny says in reality, the road is perfectly flat.

Denny says the goal is simple: to change the driver's mind-set to be less aggressive. 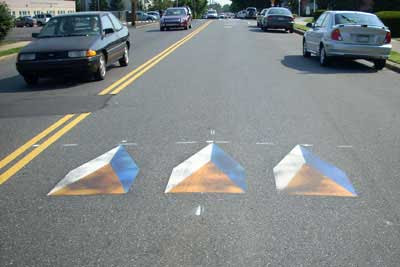 The devices will be deployed at about 100 intersections around Philadelphia. They'll give the illusion that something is sticking up out of the pavement so motorists will slow down.

Police are also getting more speed enforcement tracking devices for squad cars, and officers in six districts will be assigned specifically to go after speeders.

With news video.
Posted by arbroath at 9:49 am
Email ThisBlogThis!Share to TwitterShare to Facebook