A Championship footballer has been fined £1,350 after hitting a nightclub doorman with his girlfriend's handbag in Plymouth last November.

He was ejected from the Candy Store with friends at about 0400 GMT on 11 November and an argument started on the pavement outside. 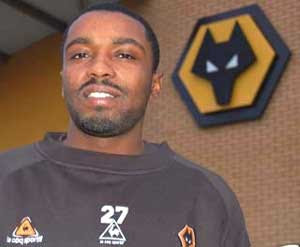 Prosecuting barrister David Gittins said CCTV footage showed Ebanks-Blake holding "something over his head" which he hit the doorman with.

He said: "It was his girlfriend's handbag. Having been ejected from the club there was a fracas. We do not know what was in the handbag. There was a two to three inch cut on the man's head."

At Plymouth Crown Court, Judge Francis Gilbert QC said he was a man of previous good character and gave him credit for pleading guilty. Ebanks-Blake was also ordered to pay compensation of £500 and prosecution costs of £650.

You can see a video of the incident here.
Posted by arbroath at 9:20 am
Email ThisBlogThis!Share to TwitterShare to Facebook