A married couple who astonished diners at their restaurant by appearing to work 21-hour days have revealed the secret of their labours.

Customers dubbed the pair the “robot couple” because of their marathon hours, which involved opening the restaurant at 6am and apparently still being there to close it up at 3am.

But it has now emerged that the restaurant in the city of Yiwu in eastern China is actually run by two couples – and both the men and the women are identical twins. 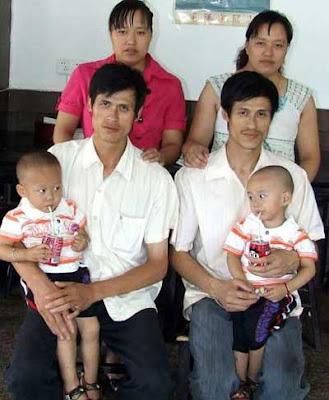 The twin brothers married the twin sisters three years ago, and the four of them decided to go into business together.

Both couples now have young sons, who are also almost identical.

“Many diners thought we worked too hard and are like robots, but they don’t know that we are actually four people,” said Mao Zhanghua, 32, one of the brothers.
Posted by arbroath at 9:26 am
Email ThisBlogThis!Share to TwitterShare to Facebook