Man stole buses and drove them on routes

Police have arrested an 18-year-old man accused of stealing at least three buses and driving them on their routes.

James L. Harris is charged with three counts each of third-degree grand theft and burglary of an occupied conveyance.

The most recent theft occurred on Tuesday, when he was arrested and charged. 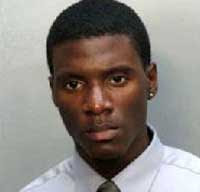 According to Miami-Dade police, Harris would take the buses from several Miami-Dade Transit bus depots in the county and drive the buses on their routes, picking up and dropping off passengers along the way. He would then return the buses at the end of the day.

Police said Harris didn't raise any suspicion because he was dressed like a Miami-Dade Transit employee. Police said he also didn't steal any bus fare.

It was unclear why Harris allegedly stole the buses, but police are investigating whether he had help from Miami-Dade Transit employees.
Posted by arbroath at 9:46 am
Email ThisBlogThis!Share to TwitterShare to Facebook