A southwest Missouri woman has sued Wal-Mart, local health officials and Cox Health Systems, claiming they discriminated against her and her monkey named Richard.

Debby Rose of Springfield said in the lawsuit that the 10-year-old bonnet macaque helps curb a social anxiety disorder that can cause her to have panic attacks in public. 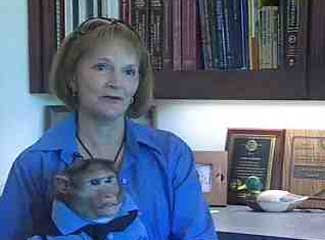 The suit contends the Springfield-Greene County Health Department lacked the authority to decide that Richard is not a service animal under the Americans with Disabilities Act.

Health officials in 2006 sent letters to restaurants and grocery stores, advising them not to let Rose in with the monkey.

More here, with news video.
Posted by arbroath at 9:33 am
Email ThisBlogThis!Share to TwitterShare to Facebook