German police women are to be issued with bullet-resistant bras to give them complete undercover protection.

The new underwear was developed as a second barrier of defence after normal bras were found to cause injuries while on duty. 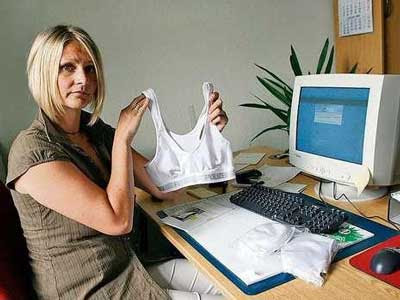 The officers' bullet-proof vests, while stopping the force of gunshots in an attack, pushed the plastic and metal parts of their underwear into their flesh, causing injury.

Carmen Kibat, a policewoman in Hamburg who tested the new underwear, said: "These can save someone's life so it's not a laughing matter." She organised "Action Brassiere" across Germany, getting hundreds of policewomen to try the bras out in the line of duty. 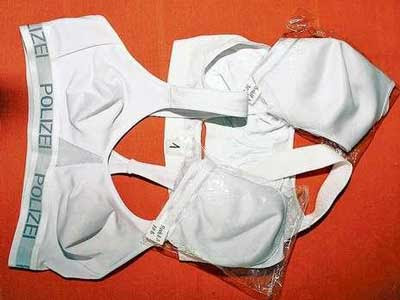 They are all emblazoned with the word "police" and made from cotton, polyester, elastic and some other synthetic materials, thickly padded and with no metal or plastic studs or fasteners.

Three thousand front-line women police officers will now be required to wear the bras on duty. Their bosses have decided to allow them to have three each. Ruediger Carstens, a spokeswoman for the police, said: "This was pioneering work. The safety of our officers is paramount."
Posted by arbroath at 9:34 am
Email ThisBlogThis!Share to TwitterShare to Facebook