An inflatable dog turd the size of a house has blown away from a modern art exhibition in a Swiss museum before bringing down an electricity line and smashing a greenhouse window.

"Complex Shit", a sculpture by the American artist Paul McCarthy, cast loose its moorings and was lifted by a sudden gust of wind from the Paul Klee centre in Berne and carried 200 yards to eventually make landfall in the grounds of a children's home.

Museum authorities said the work had an automatic safety device that was supposed to make it deflate in the event of a storm - but it failed to operate. 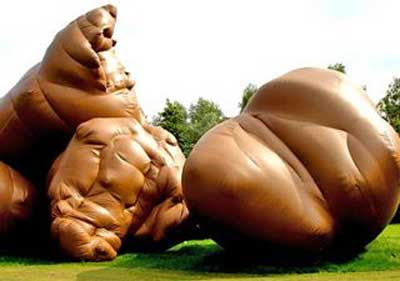 The museum's director Juri Steiner said Mr McCarthy had not yet been informed of the fate of his artwork, and that he had not yet decided whether to reinstall it in the centre's garden.

The sculpture was featured in an exhibition called "East of Eden. A Garden Show".

The Paul Klee centre's website described the show as containing "interweaving, diverse, not to say conflictive emphases and a broad spectrum of items to form a dynamic exchange of parallel and self-eclipsing spatial and temporal zones."
Posted by arbroath at 9:48 am
Email ThisBlogThis!Share to TwitterShare to Facebook