Just right for the garden: a mini-cow

It's the little cow with a big future. Rising supermarket prices are persuading hundreds of families to turn their back gardens into mini-ranches stocked with miniature cattle.

Registrations of the most popular breed, the Dexter, have doubled since the millennium and websites are sprouting up offering “the world’s most efficient, cutest and tastiest cows”.

For between £200 and £2,000, people can buy a cow that stands no taller than a large German shepherd dog, gives 16 pints of milk a day that can be drunk unpasteurised, keeps the grass “mown” and will be a family pet for years before ending up in the freezer. 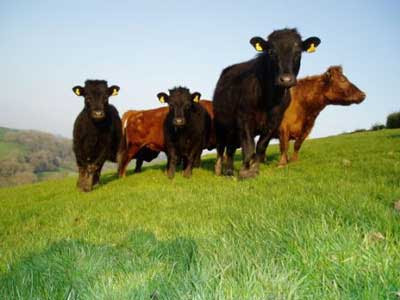 The Dexter, a mountain breed from Ireland, is perfect for cattle-keeping on a small scale, but other breeds are being artificially created to compete with it, including the Mini-Hereford and the Lowline Angus, which has been developed by the Australian government to stand no more than 39in high but produce 70% of the steak of a cow twice its size.

The Dexter originated in the south of Ireland in the 1800s as an ideal “cottager’s cow”, producing enough milk for the house, and a calf a year.

Today’s mini-cattleman follows a similar pattern, choosing to keep a single “house cow”, collecting the milk each day and using artificial insemination to produce one calf annually for meat. Many people start with one cow and let it produce a calf before sending it to slaughter at the age of two, when the meat is at its most tender and high in healthy omega3 fats.
Posted by arbroath at 9:05 am
Email ThisBlogThis!Share to TwitterShare to Facebook