New York's pampered pooches have something new to get their tails wagging - their own frozen yogurt. Well-to-do city dogs have been lapping up a new brand of treat called Yoghund, which is made especially for canines.

The treat is for pet owners who don't mind paying nearly $9 for a pack of four 31/2-ounce cups. 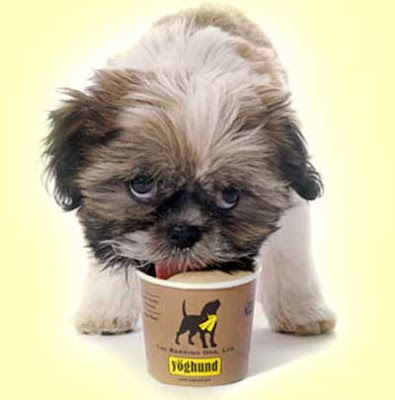 "I like it because it's very organic," said Lana Sexton, whose dog, Fig, is a big Yoghund fan.

Yoghund was created two years ago by New Hampshire kennel owner Jody Rogers. "I wanted to come up with a product that would help with relieving stress," she said. "So yogurt is the obvious choice for that." She said that she has been doing about $200,000 in sales a year.

The New York Post put the yogurt to the taste test, comparing Yoghund to a container of Haagen-Dazs vanilla frozen yogurt. And four out five dogs agreed - the regular human yogurt was their favourite.
Posted by arbroath at 9:45 am
Email ThisBlogThis!Share to TwitterShare to Facebook