It was clearly a dangerous situation: Yellow police tape crisscrossed the intersection, innocent civilians were ordered out of harm's way and the Metro station was shut down.

The bomb squad rolled in with their armoured vehicle, and out waddled the stiff, spaceman-looking officers ready to protect Washington yesterday morning. The situation? A homeless polar bear was rummaging through a trash can. Or rather, a mannequin dressed to look like a bear. 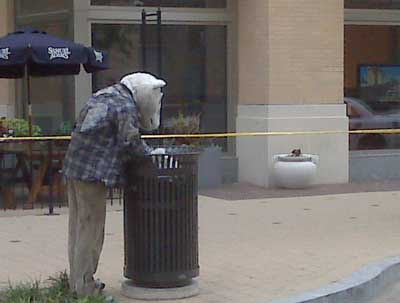 The display that caused a ruckus near the Columbia Heights Metro station yesterday appeared to be street art.

The tall mannequin beneath the polar bear head wore a tattered flannel shirt and dirty pants. Some onlookers said it was there for several hours, peering into the trash can at 14th and Irving streets Northwest until someone called police at 10 a.m. "It's a suspicious package," police spokespeople declared. So in came the bomb squad and all the precautions of a post-Sept. 11 world. 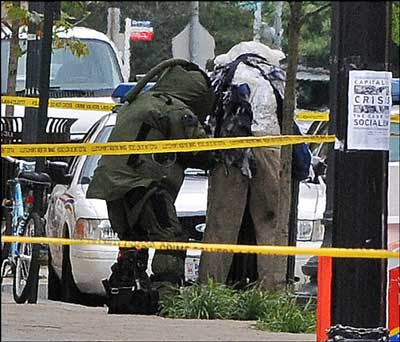 Onlookers watched a bomb technician in a blast suit walk slowly toward the bear, then pounce and cut it open. He pulled out wads of newspaper until the big, white head flopped over.
Posted by arbroath at 9:41 am
Email ThisBlogThis!Share to TwitterShare to Facebook