All aboard the atheist bus campaign

Atheist adverts declaring "there's probably no God" could be placed on buses across the country after a fundraising drive made five times the target amount in just one day.

Even religious groups donated money to the cause in the belief that the campaign would encourage people to think more about faith and could actually enhance support for Christianity.

Organisers needed to raise just £2,750 from supporters in order to pay for adverts doubting the existence of God to be plastered across 30 London bendy-buses for a month, after the prominent atheist Professor Richard Dawkins agreed to match all donations. Previous attempts to raise the money had failed. 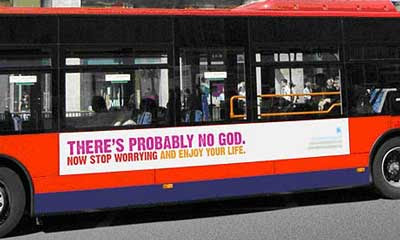 But the £5,500 target was met within minutes of a page being launched on the fundraising website Justgiving on Tuesday, and after a few hours more than £31,000 had been given to the Atheist Bus Campaign – over five times the amount required.

Now there are plans to get the message – "There's probably no God. Now stop worrying and enjoy your life" – put on buses across Britain as well as on Tube trains in the capital.

The atheist bus campaign.
Posted by arbroath at 9:37 am
Email ThisBlogThis!Share to TwitterShare to Facebook