German traffic police have been left looking like proper muppets by a British prankster. An Audi TT with British registration plates has been repeatedly caught speeding on roads in the Bavarian city of Bayreuth. But because continental speed cameras are set up for left-hand drive vehicles, the cameras keep missing the driver’s face.

Instead, they keep capturing clear views of a manic Muppet-like toy which the cheeky Brit has propped up on his passenger seat. But police admit they are even baffled about the identity of the muppet.

The No.1 suspect is Animal – the manic drummer from The Muppet Show’s house band The Electric Mayhem. But several residents of Sesame Street are also in the frame, including the lovable monster Grover and Bert’s rubber-ducky-loving sidekick Ernie.

Now police have released one of the photographs in the hope someone will recognise the furry speed demon. A German police source said: “The number plate is not enough. We need clear evidence of who is driving the vehicle too. 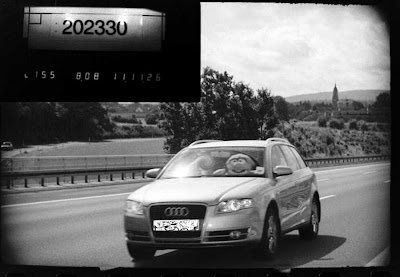 “But because this is a British vehicle we can never get a decent picture. The driver has obviously worked this out because he has placed a large puppet in the passenger seat.

“This may be an example of the famous British sense of humour but it is still dangerous driving. The driver has been caught on camera on several occasions and the puppet is on the passenger seat every time. We suspect he positions the toy deliberately before accelerating past the camera.”
Posted by arbroath at 9:43 am
Email ThisBlogThis!Share to TwitterShare to Facebook