The world's heaviest man has tied the knot. 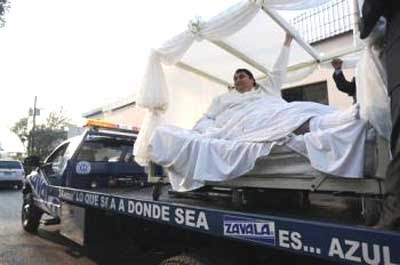 Wearing a white silk shirt with a sheet wrapped around his legs, Uribe smiled as Solis, 38, walked down a flight of stairs wearing a strapless ivory dress, a tiara and hot-pink lipstick.

He later broke into tears as a notary declared the couple husband and wife in a civil ceremony attended by more than 400 guests. For the traditional first dance as newlyweds, Uribe and Solis held hands and swayed to a romantic ballad.

Uribe's mother, Orquedia Garza, said the groom steered clear of the five-tier wedding cake. "He didn't break his diet," she said. "His doctors are here and they are watching him very closely."

A flatbed truck was brought in to tow his custom-made bed decorated with a canopy, flowers and gold-trimmed bows to the wedding at a local event hall. Two police patrol cars escorted him ahead of a long line of traffic.
Posted by arbroath at 9:14 am
Email ThisBlogThis!Share to TwitterShare to Facebook