French cat-lovers are hissing with rage about a new film poster for an "anti-Amélie" film which shows an actress dumping a cat in a dustbin. Vilaine (Villain), released this week, documents the life of Mélanie Lupin, a sentimental singleton who tries too hard to be nice to everyone until she realises this approach is getting her nowhere in the world of romance and sets about being unhelpful and rude.

The producers of the film describe Mélanie as the opposite of Amélie, the heroine of the popular 2001 film with Audrey Tautou as an charming Parisian do-gooder. In the advert for Vilaine, Mélanie, played by Marilou Berry, is seen with a wry smile, holding a live cat by the scruff of its neck above a bin. The cat looks rather bored, a reaction not shared by the Society for the Protection of Animals in France (SPA). The organisation has received so many complaints about the ad that it has released a statement describing its shock at such an image. 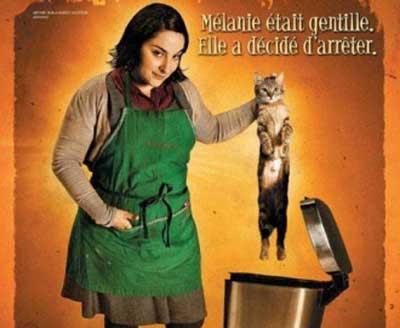 "While the SPA does not doubt the integrity of Marilou Berry and the production team who have clearly not mistreated any animals, we feel it is clear the producers of Vilaine are not aware of the impact this image may have on a fragile general public." The statement also pointed out the "nightmarish" effect the image may have on children who have cats of their own and that the public may find it amusing to imitate the actress.

For Marilou Berry, the row is far from nightmarish. "Thanks SPA," she said. "The poster was put on their website, which created a buzz. The trailer has had 250,000 hits. As for the cat in the advert, there were two of them and they are both fine – I know because I adopted them."
Posted by arbroath at 9:42 am
Email ThisBlogThis!Share to TwitterShare to Facebook