Fast food in the nude

An Australian man was served hot chips at a Territory eatery wearing nothing but his birthday suit. The late night reveller stripped bare before putting in his order at the Darwin City 24-Hour Eatery on Smith St early on Monday.

A witness said the naked man walked into the shop to order two buckets of chips with gravy. And the female attendant was reportedly only too happy to serve the nude customer.

Steven Bastick, 23, watched the naked act when he walked past the eatery. He said he "bumped into" two men standing in front of the shop. I was just walking home when I saw the two guys," he said. "They were really drunk and asked me to take photos." 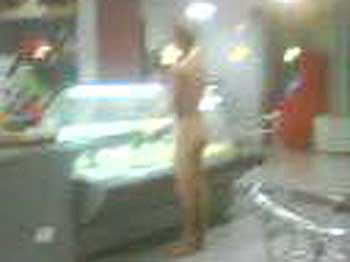 One of the men soon bared all before entering the premises. His companion stayed outside because he was allegedly "too embarrassed".

Mr Bastick said he was surprised when the naked customer did not receive much resistance from the woman behind the counter.

"The lady was just smiling," he said.
Posted by arbroath at 10:02 am
Email ThisBlogThis!Share to TwitterShare to Facebook