Reuben Powell is an unlikely terrorist. A white, middle-aged, middle-class artist, he has been photographing and drawing life around the capital's Elephant & Castle for 25 years.

With a studio near the 1960s shopping centre at the heart of this area in south London, he is a familiar figure and is regularly seen snapping and sketching the people and buildings around his home – currently the site of Europe's largest regeneration project. But to the police officers who arrested him last week his photographing of the old HMSO print works close to the local police station posed an unacceptable security risk.

"The car skidded to a halt like something out of Starsky & Hutch and this officer jumped out very dramatically and said 'what are you doing?' I told him I was photographing the building and he said he was going to search me under the Anti-Terrorism Act," he recalled. 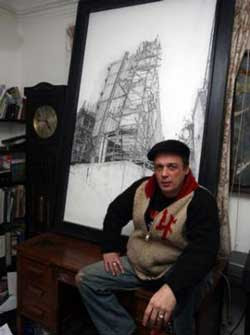 For Powell, this brush with the law resulted in five hours in a cell after police seized the lock-blade knife he uses to sharpen his pencils. His release only came after the intervention of the local MP, Simon Hughes, but not before he was handcuffed and his genetic material stored permanently on the DNA database.

But Powell's experience is far from uncommon. Every week photographers wielding their cameras in public find themselves on the receiving end of warnings either by police, who stop them under Section 44 of the Terrorism Act 2000, or from over-eager officials who believe that photography in a public area is somehow against the law.

So serious has the situation become that the MP and keen photographer Austin Mitchell, chairman of the Parliamentary All-Party Photography Group, tabled an early day motion last March deploring the "officious interference or unjustified suspicion" facing camera enthusiasts around public buildings, where they are increasingly told that it is against the law to photograph public servants at all – especially police officers or community support officers – or that members of the public cannot be photographed without their written permission. The Labour MP is now calling for a photography code for officers so that snappers can continue going about their rightful business.
Posted by arbroath at 9:47 am
Email ThisBlogThis!Share to TwitterShare to Facebook