A five-year-old boy whose home in Swindon is under attack from teenagers tried to burn his house down because he is too scared to continue living there.

Jimmy Davis set fire to the curtains when he found a lighter downstairs and gutted his bedroom in the hope that it would destroy the house and force his family to move out.

Firefighters extinguished the blaze before it spread to the rest of the house but all the belongings in his room were completely destroyed. 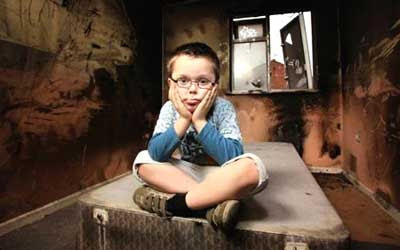 Jimmy has been forced to cower in his bedroom as teenagers torment his father Sydney and throw stones and bricks at the house.

Mr Davis, 65, has been targeted for abuse since confronting the gang with a plank of wood last year – which saw him dragged into court for possessing an offensive weapon. Pauline Davis, 43, said: "We keep speaking to him asking him why he did it and he said 'because I want to move, mum'.

"That's what he told the police – he'd done it because he wants daddy and mummy to move. Jimmy is scared to go outside because of all the youths that hang around on the estate."
Posted by arbroath at 9:40 am
Email ThisBlogThis!Share to TwitterShare to Facebook