Couples have been banned from kissing at Warrington Bank Quay Station because it holds up commuters.

No-kissing signs have appeared in the taxi rank at Warrington Bank Quay Station forcing lovers to use designated areas only. 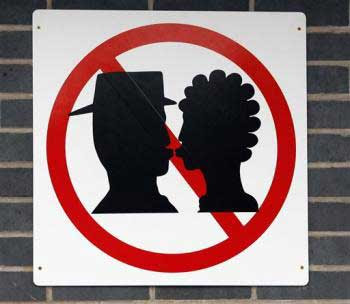 The signs were erected after concerns that passionate embraces were causing delays for commuters with more passengers being attracted there. Warrington Bank Quay is believed to be the first in the country to put up such signs.

Ruth Sargeant, 38, who uses the station to travel to Manchester, said: "It's ridiculous. I don't see the point of having a no-kissing area, surely people are entitled to say their goodbyes." And Tom Hall, 25, another commuter, said: "It's daft. What are they going to do if they catch couples kissing, fine them?" 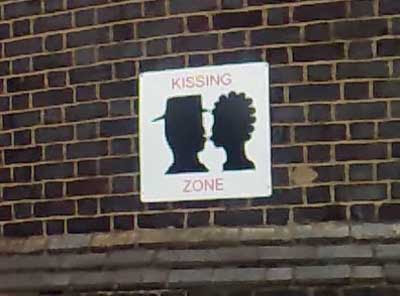 The idea of no-kissing signs was first suggested by Colin Daniels, chief executive of the Warrington Chamber of Commerce.

He said: "It was all a bit of fun. But now Virgin Trains have agreed to put them up as part of the refurbishment. They may seem frivolous but there is a serious message underneath."

There's a news video here.
Posted by arbroath at 9:50 am
Email ThisBlogThis!Share to TwitterShare to Facebook