A grieving father from Ayrshire has buried his teenage son in the back garden of his home. Robert Milloy, 18, died after he was hit by a train at the level crossing in his home village of Gatehead, near Kilmarnock, on Friday.

The farm worker was laid to rest under his father's lawn, which is near the railway line, on Wednesday. East Ayrshire Council said there were no laws against people being buried in the garden. On Wednesday, Robert's coffin was taken from the funeral home in Kilmarnock to the garden in a tractor and trailer.

His father, Rab, said he wanted his son to be nearby forever. The family plan to plant a willow tree above the grave. 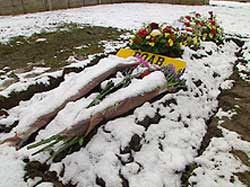 The 18-year-old was hit by the Girvan to Kilmarnock train as he walked over the crossing at about 1235 GMT on Friday. British Transport Police said he may have been distracted by an MP3 music player or mobile phone.

The family contacted East Ayrshire Council seeking permission to bury him in the garden. A council spokeswoman said they offered support and advice and informed Mr Milloy that there was no legislation preventing the burial.

They also advised the family that the grave had to be at least five feet deep and that they should get in touch with utilities companies to ensure it did not interfere with any pipes or cables. It was also suggested that they put it on the title deeds of the house and inform neighbours.
Posted by arbroath at 9:38 am
Email ThisBlogThis!Share to TwitterShare to Facebook