She was born in Birmingham, educated in Bristol, speaks fluent English and holds a British passport – but Julie Dutton has been told she will have to sit an English language test if she wants to work in Australia.

Three weeks ago the registered nurse, who moved from London to Sydney with her Australian husband Dale Mervin last year, applied to transfer her British nursing qualifications to New South Wales so that she could work in Australian hospitals.

Ms Dutton, 33, who specialises in cardiothoracic intensive care, was told that she would have to sit an English language test for her application to be processed – the standard procedure for any immigrant applying to be registered or enrolled with the NSW Nurses and Midwives Board, according to a new policy introduced on January 1. 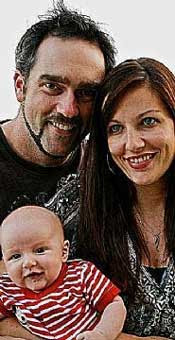 The written and spoken tests will cost £131 ($280), and Ms Dutton was told that she will have to wait until June to sit them because there are no available places before then.

She was told that despite her obvious proficiency in the English language there were no exemptions.

“I think it’s just ridiculous,” Ms Dutton said. “I am English, I was born in England, I speak English, I have a British passport, I was educated in Britain and I got my nursing degree in Britain, so I just couldn’t believe it when they told me. I think it’s just a joke – this is just a mad, stupid policy.”
Posted by arbroath at 9:53 am
Email ThisBlogThis!Share to TwitterShare to Facebook