Breastfeeding while driving gets woman a ticket

A Harrison Twp. woman faces child endangering charges after police said she admitted to breastfeeding her child and talking on a cell phone while driving, according to Kettering Police Officer Michael Burke. The incident happened about 7:45 a.m. on Thursday, Feb., 26, near the intersection of Far Hills Avenue and Dorothy Lane, Burke said.

A male motorist called the police department's non-emergency number to report that he had seen the woman breastfeeding and talking on a cell phone while driving, Burke said. The man reported that he also witnessed the woman driving a Honda minivan into the parking lot of a local school and saw some children get out of the van. The man then got the van's licence plate number and called police.

"I'm following right behind her right now on Far Hills Avenue," the caller said as he spoke to a Kettering dispatcher in a recording of his non-emergency call that was released by police. "I tried to say something to her. She literally has the little girl on the steering wheel and I said, 'I can't believe you have that kid in your lap and she said, 'You want to pop your titty out and breastfeed this kid?' That's what she said to me. I'm like, 'You can feed your kid when you stop.' It's like wet out here. It's full of traffic. It's ridiculous. She's got like three other kids in the car." 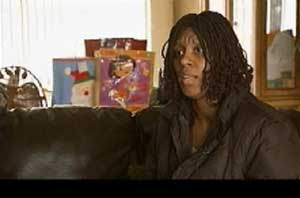 The police came to the area and tried to locate the van, but could not find it. So they used the license plate number to track down her contact information, Burke said. When a police officer spoke to her, she admitted she breastfed her child and also told police that she does not deprive her child when the child is hungry, Burke said.

The officer took the information and presented it to the city prosecutor's office. That's when Genine Compton, 39, of Elm Grove in Harrison Twp., was charged with a first-degree misdemeanor of child endangering and minor misdemeanor for unlawfully restraining her child, which Burke believes was under 2.

With audio of the 911 call. There's an video interview with an unrepentant Ms Compton on this page.
Posted by arbroath at 10:10 am
Email ThisBlogThis!Share to TwitterShare to Facebook