Girls being force-fed for marriage as junta revives fattening farms

Fears are growing for the fate of thousands of young girls in rural Mauritania, where campaigners say the cruel practice of force-feeding young girls for marriage is making a significant comeback since a military junta took over the West African country.

Aminetou Mint Ely, a women's rights campaigner, said girls as young as five were still being subjected to the tradition of leblouh every year. The practice sees them tortured into swallowing gargantuan amounts of food and liquid - and consuming their vomit if they reject it.

"In Mauritania, a woman's size indicates the amount of space she occupies in her husband's heart," said Mint Ely, head of the Association of Women Heads of Households. ''We have gone backwards. We had a Ministry of Women's Affairs. We had achieved a parliamentary quota of 20% of seats. We had female diplomats and governors. The military have set us back by decades, sending us back to our traditional roles. We no longer even have a ministry to talk to." Mauritania has suffered a series of coups since independence from France in 1960. The latest, in August last year, saw General Mohamed Ould Abdelaziz seize power after the elected president tried to sack him. 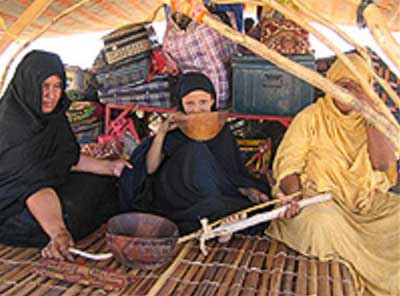 A children's rights lawyer, Fatimata M'baye, echoed Ely's pessimism. "I have never managed to bring a case in defence of a force-fed child. The politicians are scared of questioning their own traditions. Rural marriages usually take place under customary law or are overseen by a marabou (a Muslim preacher). No state official gets involved, so there is no arbiter to check on the age of the bride." Yet, she said, Mauritania had signed both international and African treaties protecting the rights of the child.

Leblouh is intimately linked to early marriage and often involves a girl of five, seven or nine being obliged to eat excessively to achieve female roundness and corpulence, so that she can be married off as young as possible. Girls from rural families are taken for leblouh at special "fattening farms" where older women, or the children's aunts or grandmothers, will administer pounded millet, camel's milk and water in quantities that make them ill. A typical daily diet for a six-year-old will include two kilos of pounded millet, mixed with two cups of butter, as well as 20 litres of camel's milk. "The fattening is done during the school holidays or in the rainy season when milk is plentiful," said M'baye. "The girl is sent away from home without understanding why. She suffers but is told that being fat will bring her happiness. Matrons use sticks which they roll on the girl's thighs, to break down tissue and hasten the process."

Other leblouh practices include a subtle form of torture - zayar - using two sticks inserted each side of a toe. When a child refuses to drink or eat, the matron squeezes the sticks together, causing great pain. A successful fattening process will see a 12-year-old weigh 80kg. "If she vomits she must drink it. By the age of 15 she will look 30," said M'baye.

Full story here.
Posted by arbroath at 9:57 am
Email ThisBlogThis!Share to TwitterShare to Facebook