A Vietnamese man has appeared in court after being arrested for slaughtering lions and rhinos at his home in the posh Pretoria suburb of Waterkloof.

Nuyen van Hai — who rents a large house in the suburb, where scores of foreign diplomats, police chief Jackie Selebi and Minister in the Presidency Manto Tshabalala- Msimang live — appeared briefly in the Hatfield Community Court.

The man, believed to be in his early 20s, is in police custody and his case was postponed to April 15 for further investigation. City of Tshwane spokesman Console Tleane said that, in addition to the carcasses of at least 12 lions and rhinos found at the upmarket house on Monday, the city’s metro police found an estimated R1-million in US and South African currency. 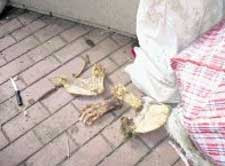 “The carcasses were lying all over the floor, everywhere in the house,” Tleane said. “We investigated and found the US and South African currency hidden under the mattresses.” Tleane said the discovery of the carcasses was “the most horrific incident we have seen so far”.

Van Hai was arrested on Monday afternoon for contravening city bylaws in a metro police raid prompted by a tip-off. Tleane said Van Hai might face more charges, depending on the outcome of the investigation.

A man close to the inquiry, who spoke on condition of anonymity, said the animals had been trucked to the house and slaughtered there. “I found them slaughtering the animals in the house and that was when I alerted the SPCA about what was happening,” he said.
Posted by arbroath at 9:57 am
Email ThisBlogThis!Share to TwitterShare to Facebook