Police said a 19-year-old who tried to rob a liquor store sat down and cried when the 76-year-old owner locked him in the store. Edwin Calix is accused of trying to rob Sykes Liquor Store in Trenton on Monday night.

Police said owner Jeff Wadkins, who was behind the counter, triggered the lock after Calix grabbed a bottle of Hennessy cognac and bolted for the door. 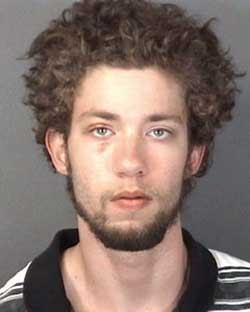 Calix then allegedly pulled out a handgun and demanded to be released. But Wadkins said he saw that the gun was a fake, refused to unlock the door and called police.

Police said Calix threw away the gun, slumped to the floor and was crying when officers arrived to arrest him.
Posted by arbroath at 9:51 am
Email ThisBlogThis!Share to TwitterShare to Facebook