A one-eyed and one-armed golfer has stunned his friends — and himself — by hitting a hole-in-one.

Former Royal Marine Alan Perrin, 45, who suffered horrendous injuries in a bomb blast, hit a one-handed drive from the second tee at the Exminster Golf Club course near Exeter. It travelled the 160 yards to the hole but then appeared to be lost.

Mr Perrin, who uses an electric buggy bought by his wife Denise, 46, to travel the course, arrived at the green with his partner but the ball was nowhere to be seen. 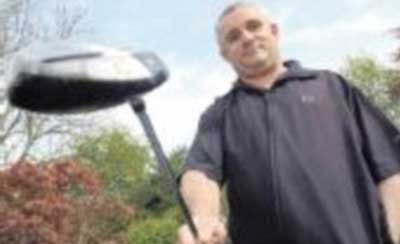 He said: "We'd lost sight of it from the tee but my playing partner said it had gone left. We spent about five minutes looking for it but we didn't want to hold up the next group so we moved on to the next tee.

"When the group behind us reached the green they found a ball in the hole and shouted up, 'Anyone lost a yellow ball?' It was mine. I asked where they found it — and it was in the hole."

"I was stunned. I was a hole-in-one virgin up to then. I took up golf some time after my accident and have only ever played with one arm."
Posted by arbroath at 9:22 am
Email ThisBlogThis!Share to TwitterShare to Facebook