Surgeons in Russia's Urals Region were staggered to find a 5-centimeter high spruce growing inside a man's lung.

The discovery was made while Artyom Sidorkin, 28, from the Urals city of Izhevsk, was undergoing surgery.

Sidorkin had complained of extreme pain in his chest and had been coughing up blood, doctors suspected cancer. 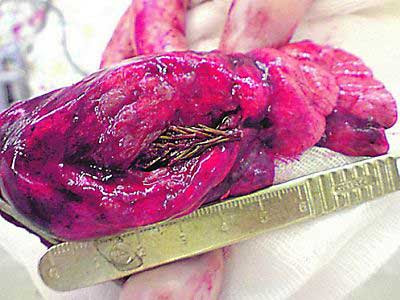 Medical staff believe Sidorkin had somehow inhaled a seed, which later sprouted inside his lung. The spruce, which was touching the man's capillaries and causing severe pain, was removed.

"It was very painful. But to be honest I did not feel any foreign object inside me," Sidorkin said.
Posted by arbroath at 10:19 am
Email ThisBlogThis!Share to TwitterShare to Facebook